Home » Neuroscience » Seizures in children: What they mean, what to do
× Share this Article

It can be very scary to watch a child have a seizure. Fortunately, for most children a seizure is a one-time experience. If not, a pediatric neurologist can help.

What is a seizure?

Seizures are caused by abnormal electrical activity in the brain. One well-known type of seizure is a “grand mal,” or generalized tonic-clonic seizure. It is characterized by loss of consciousness, shaking of arms and legs, drooling and eyes rolling up. A person having a grand mal seizure also may lose bowel or bladder control.

What to do when a child has a seizure

When to call for help

It is very important to time the seizure. Most seizures last around one minute, but some can last more than five minutes. In this case, call 911 for immediate help. It is crucial to stop a prolonged seizure, which may have the potential to cause brain damage, and medics can help.

What causes seizures in children?

A specific triggering factor such as metabolic, infectious, toxic, trauma or vascular conditions may cause a seizure. Seizures also may be genetic in families with a predisposition to epilepsy.

In younger children, a febrile seizure may occur during a fever. This type of seizure usually is not associated with epilepsy.

A child will need to be evaluated after a seizure. If there are no significant findings, a follow-up with a pediatric neurologist is recommended for further investigation and diagnosis.

Does my child have epilepsy?

Parents should be reassured that having a single seizure is not the same as having epilepsy. Epilepsy is diagnosed after two or more non-febrile seizures that occur 24 hours apart.

Epilepsy can be diagnosed after a single seizure if an electroencephalogram (EEG) is abnormal and suggests a risk of seizure recurrence.

What tests are done after a seizure?

A careful physical and neurologic exam may detect abnormalities suggesting a risk for epilepsy.

A routine awake and sleep EEG is done to assess the presence of abnormal electrical activity. Unless a seizure occurs during the test, the EEG may be normal.

Neuroimaging is recommended to look for brain abnormalities that may be the cause of a seizure. Magnetic resonance imaging (MRI) is one type of neuroimaging.

Neuroimaging should be performed immediately after a seizure if the effects of the seizure linger, or if a child doesn’t fully recover. Neuroimaging also should be considered for a child with:

In most cases, tests do not find abnormalities, and epilepsy is the diagnosis only if a second seizure occurs in the future.

What to do after a seizure

After witnessing a seizure, many parents fear a recurrence. Children can resume most activities, but parents should take some precautions. Children should:

Sleep deprivation, stress and certain medications can increase the risk of another seizure.

The risk of recurrence after a first non-febrile seizure is about 40 percent over the next two years. During this period, 60 to 70 percent of seizure recurrences are within six months of the initial seizure.

Structural abnormalities in the brain and an EEG showing epileptiform discharges increase the risk for seizure recurrence.

If you have questions about seizures, or if your child has previously had a seizure and you have concerns, call 206-215-1440 to schedule an appointment with a pediatric neurologist, or learn more about our services here. 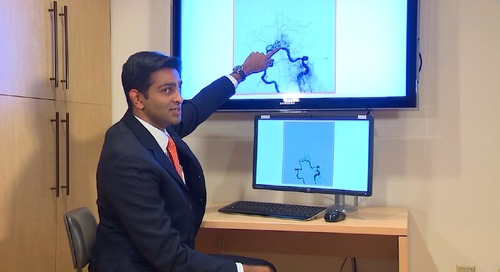 Time is the difference between death and recovery in a stroke

Three hours could be the difference between death, disability or complete recovery from a stroke. That's th...

Why do you continue to have pain long after whatever caused the pain is gone? The answer is that the pain h...