I have been asked many times about toenail fungus and how to treat it. It is a common condition and distressing to look at, at least from the patient's perspective. There are theories abound as to the cause or causes, and I've heard of treatments from tea-tree oil soaks to surgery, but the really bedeviling part about this affliction is the generally high likelihood of recurrence no matter what you do. The medications and some of the other treatments available seem to work for a time, only to fail later on. But there may be a solution.

A curious observation is that exercise, presumably through increasing the blood flow to one's extremities, tends to increase the rate of nail growth. Now in the parlance of the research community, study subjects are collectively given the letter "n", so an "n of 1 trial" is a humorous reference to the idea of seeing and thinking about just one case. Generally you hesitate to draw conclusions from just one person's experience, but if it is physiologically plausible, maybe it is worth reflecting on.

I have known a gentleman for several decades who happened to take up distance running just after developing toenail fungus. Over time, his toenail growth rate accelerated, and the fungus disappeared. He continues to exercise regularly decades later, now by walking or riding a bike or swimming, rather than running, but interestingly the fungus has never recurred.

So here is my recommendation for toenail fungus: do whatever you decide with your doctor to treat or not treat the condition on presentation. Then be sure to take up an activity that increases blood flow to your lower extremities. Jogging, walking, a stationary bicycle - choose according to your capacities and with the advice of your doctor. Carry it through for at least 30 minutes 5 times a week and see what happens. You will thus initiate your own "n of 1 trial", and you just might keep those fungi away. And even better, your heart and all the rest of you will be healthier for the effort! 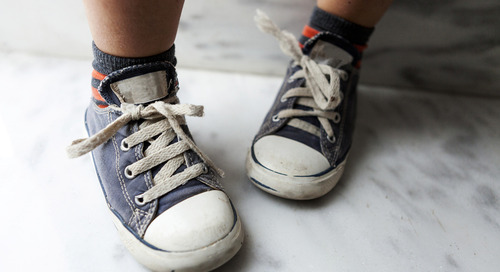 Have you noticed that your child walks with his or her feet rotated inward instead of pointing straight a...

Hardening of the arteries is a disease for the ages

A couple of months ago the New York Times published an interesting article summarizing recent findings of...