It is widely known that colonoscopy not only detects colon cancers but enables the removal of pre-cancerous polyps. Large polyps are sometimes detected during a colonoscopy that the physician feels are too large to safely remove by standard polypectomy techniques. Many patients with large benign polyps are sent for surgery because their physicians feel they cannot remove them through the colonoscope.

However, the vast majority of large, non-cancerous colon polyps can be completely removed by colonoscopy at specialized centers, allowing patients to avoid the discomfort and potential risks of partial colon resection.  Studies have shown that 85-95% of non-cancerous polyps sent for surgery can be removed endoscopically.  The risk of complications associated with endoscopic removal of large polyps includes a 1% risk of perforation and a 5-10% chance of acute or delayed bleeding.  These risks, however, are substantially smaller than those of even laparoscopic colon resection, which can be several-fold higher. Surgical treatment also includes risks associated with general anesthesia, which is rarely needed for colonoscopy.  Unfortunately, many centers are not equipped to perform complex polypectomy and few gastroenterologists have special training or expertise in this area.

At Swedish Gastroenterology, we have focused on providing safe and effective complex polypectomy with advanced technologies and tools not often available at smaller centers.  Our specialists have performed hundreds of these procedures with excellent outcomes.  In rare situations where surgery becomes necessary, our team of highly trained colo-rectal and oncologic surgeons can often perform a minimally invasive robotic colon resection, getting patients home quickly with minimal discomfort.

A 48-year-old man with a family history of colon cancer had multiple large colon polyps identified during his screening colonoscopy.  His gastroenterologist referred him to a surgeon for removal of the right colon.  A second opinion by another gastroenterologist in his community also recommended surgery.

He elected to attempt endoscopic removal at Swedish with special techniques including use of a Spirus overtube, repeat injection of blue dye and saline into the submucosal space and ablation with Argon Plasma Coagulation (APC) at the margins of the resection to reduce the chance of polyp regrowth.  The defect was closed with small clips to reinforce the wall of the colon and reduce the chance of subsequent bleeding.  No cancer was found in the polyp, there were no complications, and he went home immediately after the colonoscopy and was back to work the next day. The "carpet" polyp near the opening of the appendix. The same area after dye injection and careful removal of all polyp tissue by piecemeal snare cautery. Dealing with MS is Different for Men

Multiple Sclerosis (MS) care for men and women – is it a surprise that their MS health care support needs m...

Move over Angry Birds and Words with Friends… make room for hearing apps!

Smartphone technology has led to an explosion of cell phone apps.  Originally created as games and entertai... 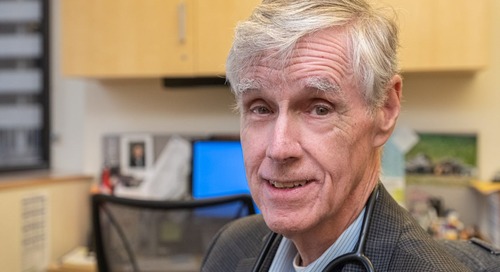