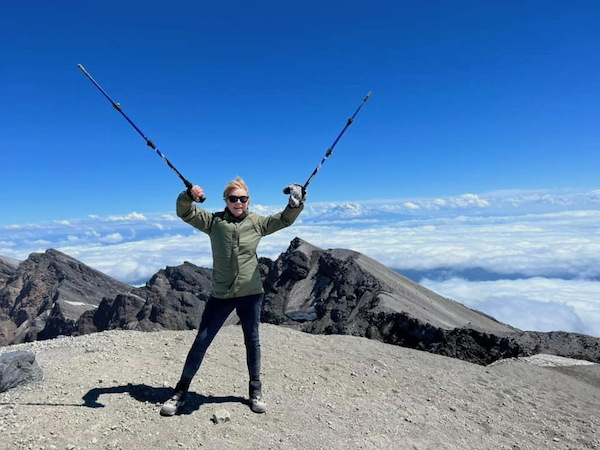 When Barbara Travers, 66, climbed Mount St. Helens in August, she knew from the very start that she’d make it to the top.

Sure, she’d never climbed a mountain before, but she’d trained hard and knew what to expect.

Barbara, her fellow hikers and a guide made it through the forest and up the 2.5 miles of boulders together. Then, when they hit the last mile of vertical gravel and sand, one of the hikers started struggling with the steep terrain. “Our guide told me to keep going,” recalls Barbara. “She said, ‘I can see you. Keep going.’ So, I did.”

When she was halfway up the last mile, Barbara burst into tears: “I was all alone. It was so difficult hiking up what felt like a giant sandhill. As I looked up at the summit and saw the rest of my team cheering me on, I lost it. I knew at that moment I was going to make it. When I did, it felt like I was on top of the world. It was a monumental achievement. But so is beating cancer.”

Almost three years before summiting Mount St. Helens, Barbara knew something was wrong. She’d played tennis the day before, as usual, but woke up with excruciating pain in her right shoulder blade the following morning.

“I figured I’d pulled a muscle,” she says.

Barbara went to a clinic and was prescribed muscle relaxers, but a few days later, the intense pain was still there. She kept looking for the cause of the pain until, six weeks later, she finally had a diagnosis: solitary plasmacytoma — a single, abnormal mass, or tumor, of plasma cells that had built up in the vertebrae of her neck.

The treatment for solitary plasmacytoma wasn’t fun but relatively simple. Barbara wore a cervical collar (neck brace) for four months, had surgery to remove the tumor and followed up with radiation to get rid of any remaining cancer cells. By December of 2019, she had a clean bill of health.

But she also had a warning. “They told me a solitary plasmacytoma is a precursor to multiple myeloma,” she says. Multiple myeloma is a blood cancer that forms in the plasma cells, which are a type of white blood cell that helps fight infection. Although treatment can make the disease go away for a time, there isn’t a cure, and the five-year survival rate in the United States is 55% (although this rate has been steadily increasing thanks to treatment advances).

“They said they’d gotten rid of the solitary tumor, but now we had to sit and wait,” says Barbara. “I could develop multiple myeloma at any time. It could be 10 days or 10 years.”

Getting a new birthday

It was three months.

But Barbara had an advantage. Because she was so active — playing tennis multiple times a week, practicing yoga, lifting weights and walking her dog regularly — they’d been able to catch her cancer early. “The doctors told me if I hadn’t been active, I wouldn’t have had symptoms until it had advanced,” she says.

Barbara started eight months of chemotherapy to prepare her body for a stem-cell transplant, which replaces bone marrow with healthy cells. She received the transplant on Feb. 19, 2021, and celebrated a new birthday — the day she received a new immune system.

Recovery from a stem-cell transplant usually takes two years. It’s long and arduous and tiring. But Barbara took it step by step. She learned she couldn’t rush her recovery and could only prepare for it. She might have laughed when David Zucker, M.D., Ph.D., a physical medicine and rehabilitation specialist at Swedish Cancer Institute, told her she was going to have to do simple exercises to start, like flexing her wrists and doing the alphabet with her ankles to get them moving — but she quickly learned he was right.

“I was so tired,” she recalls. “Initially, I couldn’t walk from my bedroom to the kitchen without resting.”

Barbara persevered. During a conversation with one of her nurses, she mentioned wanting to expand her support group. That talk helped her find the right people. “The nurse told me, ‘I’ve got a group for you. It’s a bunch of ladies who go out and do stuff.’” It was Team Survivor Northwest, a Seattle-based organization that offers fitness and health education programs to help women cancer survivors take an active role in their physical and emotional healing.

Soon, Barbara was joining other women cancer survivors for training hikes once a week. The goal was not just to scale the 8,365-foot summit of Mount St. Helens, but to raise money for fellow women who’ve been diagnosed with cancer.

Barbara and 13 other women cancer survivors completed the 10-mile trek on Aug. 10, along with seven guides, six of whom are also cancer survivors. They raised nearly $50,000.

Bin Xie, M.D., a hematologist and medical oncologist with Swedish Cancer Institute who treated Barbara, has climbed Mount St. Helens himself. He said Barbara’s “eternal optimism” helped her fight cancer — and make it up the mountain.

“Barbara was able to achieve what she did because she was in such good health to start with,” says Dr. Xie. “But what makes her unique is her positive attitude and positive energy, which she brings to everyone around her.”

Dr. Xie continues, “I know how hard it is to climb Mount St. Helens, and the fact that she did it after having a transplant for myeloma and while still on a chemo drug is inspiring to me. It just shows how strong, mentally and physically, she is.” 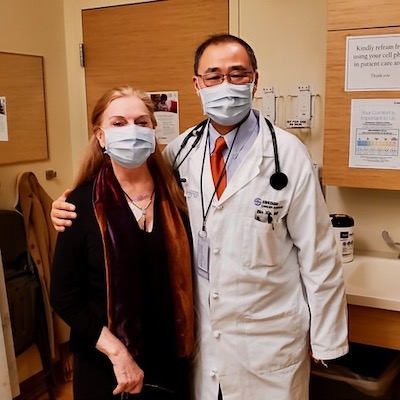 When Barbara was diagnosed with cancer, she knew from the very start that she was going to live.

“My mantra throughout cancer treatment was, ‘Keep going,’” she says. “I knew that people die from this cancer, but it didn’t occur to me to die. It wasn’t an option.”

On Feb. 19, 2023, Barbara will celebrate her new second birthday (the two-year anniversary of her stem-cell transplant) with a measles, mumps and rubella vaccine — a big deal because it means her immune system will finally be able to handle a live virus.

At present, Barbara is considered in remission, but she knows she’ll likely always live with the disease. At the same time, multiple myeloma treatments continue to advance. In the past two years, the U.S. Food and Drug Administration has approved two CAR T-cell therapies to treat multiple myeloma when the cancer either doesn’t respond to treatment or returns after treatment. Both work by binding to a protein on the surface of myeloma cells.

“It’s an exciting field because treatments are improving all the time,” says Dr. Xie.

But Barbara isn’t worrying about the future right now. She’s focused on the present and helping those behind her on the mountain.

“I tell people you have to listen to your body, and you have to trust your doctors and do what they tell you. I want them to know that cancer doesn’t have to be a death sentence, that they can ‘keep going’ and get to the top, too.” – Barbara Travers, patient at Swedish Cancer Institute.

If you’re concerned about cancer or looking for a second opinion, the Swedish Cancer Institute can help. Our team works in a collaborative environment to put you at the center of your care, focusing exclusively on cancer — from diagnosis to treatment to survivorship.

Use Swedish Virtual Care to connect face-to-face with a provider who can review your symptoms, provide instruction and follow up as needed. If you need to find a provider, you can use our provider directory. 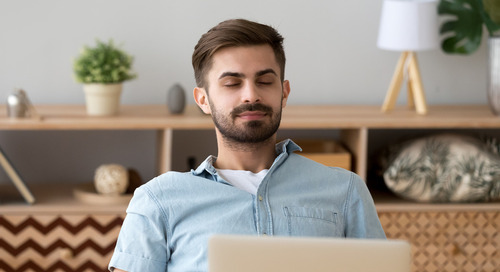 These deep breathing techniques can help us manage stress and anxiety.